I celebrated this past week from my half ironman race by not doing any running or biking. I did get in a little 1500 meter swim in though. I am at a point in my training and racing where I've accomplished what I wanted and now I can "play" with no set schedule.

I am going to try and have some fun by mixing my workouts as much as possible like short sessions of run, bike, stepper, bike, or spin class, run, swim. The point will be not to do too many long sessions of an individual sport.

This coming fall season we are planning on backpacking in the Alleghenies and the Grand Canyon where we will hike from the north rim to the south rim. If I have any training schedule it will be to walk and hike with my wife as much as we can. I need to help her get in shape for our Grand Canyon trip at the end of October.

Any other racing for this year that looks good I'll be ready to do on the spur of the moment.

The year 2008 will be my recovery year where I will build my endurance base of swimming, biking, and running and will race at the Olympic distance triathlons before I attempt another half ironman in 2009.

I'd like to thank everyone for their kind words of compliments sent to me on finishing my first half ironman.

The Great Buckeye Half Ironman.

I am happy to say I've completed my first half ironman race this past weekend.

The race was held at Caesar Creek State Park about a 3 hour drive from my home. I drove down Saturday afternoon listening to the new Harry Potter book on tape, and not knowing where I would spend the night. I first stopped at the race expo to pick up my race packet and then I drove the bike course in my car. I had a good idea of the terrain because I biked part of the course back in July but this time I was able to follow the freshly marked 28 mile loop course.

I then drove to the nearest Holiday Inn and inquired about a room but when I heard 98 dollars I said, "no thank you" and walked next door to Max & Erma's for a Tuscan Chicken pasta dinner. I enjoyed the meal and then drove across the street to a Budget Inn and got a room for 48 dollars. I think I was the only one from the race that stayed there because I didn't see any other triathletes around. I spent the evening cleaning my bike and oiling the chain. By 7 PM I was snuggled in bed reading Fantastic Voyage for about an hour before my eyes got too heavy to keep open.

For race morning I woke up at 5am to overcast clouds and comfortable temperatures. I ate a banana, a Cliff Bar, and drank a sports bottle of HEED.

The swim consisted of 2 loops in a rectangle formation. I wore my wet suit and enjoyed that little extra buoyancy which I think helped my swim time. I swam steady with some efforts while getting out of the way of some people that were swimming too close to me. I have to say I had a good 1.2 mile swim.

The bike portion was my favorite. We had overcast clouds most of the time. The course was rolling. I found myself passing all kinds of people but no one in my age group. I couldn't have finished the swim ahead of every one in my wave and I knew for sure I wasn't the last one out of the water. It turned out 3 guys did get ahead of me on the bike and the rest were behind. I rode with my bike computer displaying my average speed. My goal pace was to average 20 miles per hour which I was comfortable doing and managed to finish with an average 20.1 mph for 56 miles.

My first 2 miles of the 13.1 mile run I averaged a 6:40 pace and realized after 3 miles I was pushing the pace too hard. The sun was out and I was getting hot. I think around 4 miles my legs felt heavy and stiff as a board which reduced me to lots of walking. I was wondering if I depleted my electrolytes and by mile 6 I took a electrolyte pill and wondered if and when it would ever kick in. By mile 10 my legs felt revived and I was able to run strong the last 3 miles without any walking.

Even though this was my first half ironman triathlon I was happy to complete it in 5:07:06 I know what to expect in the run and I'll remember to take some electrolytes and to not push the pace early in the run.

For me to prepare to race this coming weekend in my first Half Ironman Challenge took:

A heart's desire and a life of passion.

And many hours of Strength Training, Walking, Hiking, and Yoga.

Confidence in my training schedule and believe that I have trained enough to perform well.

Confidence in my nutrition plan for race day.

Mental exercises of simulating each event of the triathlon race.

And if something unexpected happens I'll deal with it to the best of my abilities while remaining level headed.

Pacing for the Burning River 100

I had the honor and privilege to have run as a pacer in the Burning River 100 mile foot race this past weekend. I had no idea how much I would run of the 100 mile race. But I was to show up at the 65.7 mile aid station and just run however far I wanted to. When my runner (Dustin) came to the aid station around 9:20pm I was there and ready to run with him.

The race began 5:00am in the morning and Dustin wasn't sure how he would hold up for this run because he ran the Mohican 100 about 7 weeks before this race. He said his legs still didn't feel quite recovered from that race so he was going to run 50 miles and see how the legs felt.

I have to say when he came into the 65.7 mile aid station he looked strong. Compared to some of the other runners coming into the area he did not limp or have any noticeable pain. I was glad for him and told him that I would run with him all the way to the end.


I was so excited to be part of this race and to help pace him. I think the first 10 miles flew by and while we chatted up a storm we passed at least 10 people. When I started with him I think he was around 45th place overall. Every time we caught a runner we would say hello and encourage them to continue on strong. We were having fun.


The race course was mostly on hiking trails all through the Cuyahoga Valley. There were many miles of trails we ran on that I've never been on. Even though it was dark, while we ran into the wee hours of the night, I enjoyed the beautiful scenery. We each had head lamps on and carried flash lights so the trail was well lit enough to keep us from tripping over roots or rocks.


The volunteer support was the best. As we came to an aid station they would ask us if we needed anything, fill our water bottles, and then show us the great food they had for us to eat. They would speak encouraging words to us and wished us the best to complete the run.

Some of the things I learned from this magnitude of long running was that a runner benefits by having someone to pace with and that he needs to have a support crew. I'm sure many runners go without these but running 100 miles with a pacer and a crew makes for a more pleasant experience.

I would run behind Dustin for most of the time but I would also go up front at times leading him up some hills. I did not want to push him too much from behind or from the front because I did not want to burn him out either.

His wife was the support crew and I would communicate with her via cell phone letting her know our condition and whether we needed anything at an aid station that she would be waiting for us at. At one point after 80 some miles we were running with our bellies full and our legs moving fine we told her not to meet us at the 91.3 mile aid station but to get some rest and meet us at the finish line. I told her to get the camera ready and to take some good pictures of us sprinting to the finish with big smiles. We finished before 7:30am.

Congratulations Dustin on your 26:22:20 finish time! I am in awe of all those runners who completed the 100 mile race. This was a monumental task for me to run all through the night and to cover 35 miles with you. I will treasure the experience of running with you forever.
Posted by Papa Louie at 2:10 PM 10 comments:

Let's get ready to rumble. 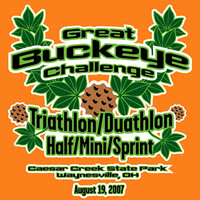 Now I can start my 2 week taper for the Great Buckeye Challenge Half Ironman.

I've been through 16 weeks of hard training and now I'm ready to take the challenge of my first Half Ironman race.

Today's 50 mile (2:55:49) bike ride was in the Cuyahoga Valley National Parkway. I felt quite comfortable for the ride and for the last 15 miles I was able to push the pace to average 20 miles per hour. I had no gels but only 2 water bottles filled with Hammer Heed in 1 and Hammer Perpetuem (with 1 added scoop of organic soybean powder) in the other. During the ride I had no sense or feeling of thirst or hunger. At least for today that was all the food I needed for the ride because I felt good.
Today's picture perfect moment of the ride was when I noticed in an open field sun rays shining down on an angle with the morning dew rising over some old farm equipment. I wish I had a camera to capture that moment.
Another highlight of the ride was when I passed the lead runner of the inaugural Burning River 100 mile foot race. I applauded and encouraged him and continued on my ride. It was a cool feeling to see the lead runner. He look quite strong and relaxed.
I was looking forward to seeing more ultra marathoners later in the day because I would be pacing a friend for the run. I originally signed up to volunteer to help man the 91.3 mile aid station but found that they had enough help and was encourage by the aid station coordinator to just go and help pace with my friend. My friend (Dustin) wanted me to meet him at the 65 mile aid station and to hopefully, run to the finish, depending on how I feel. His wife would be his support crew and would call me when he was about an hour from the aid station so that I would have plenty of time to make the check in and be ready to run with Dustin.
I'll report on the run in a day or two.
Posted by Papa Louie at 2:52 PM 6 comments: