Friday evening, I took the family, including the grand kids, out for a weekend getaway at a church retreat home to enjoy some rest and relaxation. We stayed in a log cabin home with 6 other couples. The home is located in a rural area of Ashland, Ohio.

Saturday I got up early, but not early enough to watch the sunrise, to run 8 miles. I had mapped out an 8 mile loop on country roads. The skies were overcast and the temps were around 50 degrees. The route was fairly flat and the only encounters I had that morning was 1 car, 1 horse & buggy, and 1 loose dog to chase me. I love running, or riding, on country roads and not have a car or dog scare me off the road. A dog, I can yell at to, 'go home', but a car is too big for me to mess with.

Sunday afternoon the weather was beautiful with lots of sunshine which was perfect for a bike ride. I was able to get out and ride an easy 30 miles.

I'm enjoying the easy pace and efforts of running and biking during the build up phase of my half irnoman training. Most of my training efforts is in the 110-120 bpm heart rate range which comes out to be about 17mph on the bike and 7:45 per mile on the run.

This Friday I will participate in a Maximal Oxygen Consumption Test (VO2max) and will get some real data to help determine my correct levels of heart rate for running easy or hard.
Posted by Papa Louie at 1:44 PM 10 comments:

I'd like to thank my family, friends, and including those I've never physically met here in blogger land, for all your encouraging words sent to me for running the Boston Marathon. I am motivated to train and race well, in part, because of all your kind words.

To recover from the Monday marathon on Tuesday I walked 30 minutes in the morning and 20 minutes in the afternoon. Wednesday was a day of rest. On Thursday I swam for an easy 1000 meters. The soreness in my legs lasted for a good 3 days and by Friday I felt no pain walking up or down the stairs. Friday was another day of total rest.

On Saturday I ran an easy 5 miles with my son along side me on his scooter. He thanked me more than once for the good time we had enjoying the park scenery while chit-chatting.

On Sunday I rode my bike outside, for the second time this year, for a nice 24 mile ride.

This week I start an 18 week training program for a Half Ironman triathlon. I will use the tri-newbies program to help keep me focused and on track for the August 19th event.

The first 12 weeks is a base build up of mileage. Weeks 13-16 consists of speed/quality workouts followed by weeks 17 and 18 to taper. If I can keep most of this schedule I should be confident and happy to compete in my first Half Ironman Triathlon.
Posted by Papa Louie at 9:20 AM 10 comments:

The excitement in Boston. 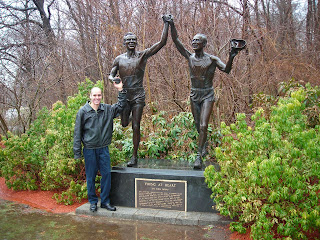 Weather forecasters called it, "Nasty in New England", or "Monsoon Monday", to describe the kind of day it was in the Boston area. Needless to say, the weather conditions did not favor the marathon runners. I did not want the talk of the crummy weather from the dramatized weather reports, and even from fellow runners to scare me or deter my plans of running well. Running well was what I trained for. As someone once quoted, "I bring the weather with me", and that was my motto for the weekend.

...This sculpture is a dedication to the spirit of everyone young at heart.


The crazy weather didn't hamper my fun or excitement of running the world renowned marathon. There was 20-30 mile per hour wind gusts, and downpours during the run. I remember having to tuck in behind runners when the winds would try to push us backward. And the rains were on and off in the early miles of the run. It didn't matter what the weather was doing, it was the crowds along the course who were cheering for the runners that made for all the fun of running the marathon.

The Wellesley girls got high fives from me but my family got hugs and kisses from me. 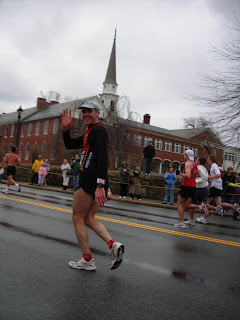 The most excitement came from the college girls of Wellesley. As we were approaching the half way point of the race you could hear the cheers and roars of the girls, even though you couldn't see them. I was awestruck by the sound. I remember looking over to another runner and was about to say something but he was plugged into his ipod. I thought how could you listen to that thing and miss the great sound of 'many waters'. The girls were all that they were promised to be, including giving out kisses to some of the runners. I gave as many high fives to as many girls I could while passing them at a 6:40 pace. But the highlight after the girls was meeting my family where I stopped to give them hugs and kisses. They were surprised I stopped to show my affection and appreciation. 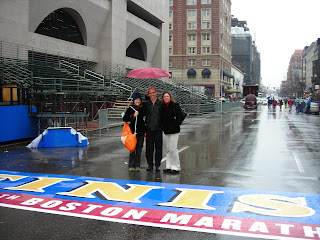 I continued to run well, feeling confident of maintaining, what I thought, was a comfortable pace but something began to happen after 30 Kilometers. It may have been the cold, windy, rainy weather, or the majority down hill running, followed by hill climbs between 16 to 21 miles, whatever it was my mind was telling me I could still finish the last 12 K fast enough to come in under 3 hours. But my legs couldn't keep up with my mind. I had to find a way to survive and push to the end. The last few miles the crowds were really cheering the hurting runners on to, 'keep up the pace' and that, 'you're almost done you can do it'. You almost feel not to let the crowds down by walking because of the well wishes and encouraging words. It's OK to walk the aid stations which I did from the very beginning of the race. I just had to walk a lot slower near the end of the race and somehow get my legs moving to run to the next aid station. And then to the finish line.

I would have liked to run 13 minutes faster but so would have a lot of other people, so I will not let it bother me and remember the enjoyable time I had with my wife, son, his wife, and the crowds along the Boston marathon course.

Why not PR at Boston?

I believe runners are hopeful people. We hope to run and race well even when adverse conditions such as, bad weather, injuries, poor diet, or any other unplanned events try to dash our hopes of obtaining a PR. We are blessed with the gift of good health and should perform to the best of our ability. It is hope that carries us beyond pain and all adversities.

Our hope is based on:
The consistent hours of running, strength training, and cross-training.
The new physique, after shedding a few extra pounds, and having more muscle tone.
The faster times of intervals, tempos, and long runs during training.
The encouragement given to us by our family and friends, telling us, we can do it.

I would like to wish great success to all those running the Boston Marathon with me this coming Monday.

Week leading up to the "great BM"!

I guess it takes all kinds of roads that lead to Boston, including heavy, wet snow covered roads. I managed to run 10 miles in our winter wonderland on the all purpose trails. The trails must have had 12 inches of snow on them, which made for a great cushioned surface to run on. I had fun making fresh foot print tracks in the snow. I didn't even mind my feet getting wet and cold. Besides I was enjoying the beautiful scenery in the park.

This week workouts include:
Monday - 30 minute Power Yoga with Graeme Street's Cyclo-Zen DVD
Tuesday - Kalahari Water Park with the cub scouts. I promise not to go crazy on the slides. If I get home early I'll do some 1/4 mile repeats on the treadmill.
Wednesday - swim 1000 meters and spin on the bike for an hour.
Thursday - 3 mile run at marathon pace.
Friday - swim 1000 meters and more Yoga with Graeme
Saturday - fly me to Boston
Sunday - 2 mile run on the Boston course or on the treadmill.
Monday - Run the great Boston Marathon (BM)

If anyone wants to track me online my race bib number is 3160. Click on the link and track me on race day.
Posted by Papa Louie at 9:35 PM 14 comments:

Here are the week long blood test results taken after running a 20 miler. The test was to analyze the normal recovery rate from a 20 mile run.

Blood Enzymes:
Lactate Dehydrogenase (LDH) - Used to measure tissue damage. Also called lactic acid dehydrogenase. For adults, in most laboratories, the range can be up to approximately 200 units/L, but is usually found within 45-90 U/L.

Creatinine Kinase (CK) - is an enzyme found primarily in the heart and skeletal muscles, and to a lesser extent in the brain. Significant injury to any of these structures will lead to a measurable increase in CK levels. The primary damage in my case was to the skeletal muscle system.
Normal Range: Male-15-160U/L Female-15-130U/L

As you can see from the results it wasn't until after the 5th day that the levels went back down to the pre-20 mile run. After the 3rd day I felt no soreness in my legs yet the test results indicated I still had inflammation. The levels may have gone down sooner if I didn't swim, bike, or run during the 5 day test period. It looks like it takes 6 to 7 days before I would be fully recovered from the 20 mile run. I think this is good proof to me that the 3 weeks needed for tapering before a marathon is very important in order to perform well on race day.

I'm sure the results have more meaning but this is all I could gather for now. I'll have to wait for the professors and the graduate student to write their report on us and hope they give us a copy.

The next test will be on the effects of counterpulsation to improve recovery from a 20 mile run, will take place in early May.
Posted by Papa Louie at 1:22 PM 10 comments: