Every workout I do during this week will have to be repeated when I take the second half of the counterpulsation on delayed onset muscle soreness test at the end of April. With that consideration in mind I'm trying to keep the intensities of this weeks workouts to a minimum. But...

Monday I swam a steady 1000 meters in the long course pool for a nice recovery day. That was good.

Tuesday was my first 15 mile bike ride outdoors for the 2007 calendar year. What a thrill to be outside riding the bike in the park and up and down the hills.

Wednesday I did 8 x 800 repeats on the track with only 1:30 rest between repeats. I wanted to do each repeat at a comfortable 2:55 pace so that I would be able to repeat them again after Boston and the DOMS test. But then I also wanted to push the pace a little to help boost the confidence meter and I managed to average all 8 repeats at a 2:48 pace. Confidence meter went up 2 points from 6 to 8.

Today I swam 500 meters at an easy pace and then 1000 meters with hand paddles and alternating with fast/slow laps. In the evening I did 18 miles on the bike trainer with an average speed of 18.4mph.

I have been getting blood tests everyday this week and the results are showing a slow recovery from the damage done from the 20 mile run this past Sunday. I'm hoping by Friday all repair is done and I'll be able to run 13 miles this Sunday. I'll post the numbers and types of tests after I get them from the lab.
Posted by Papa Louie at 10:05 AM 7 comments: 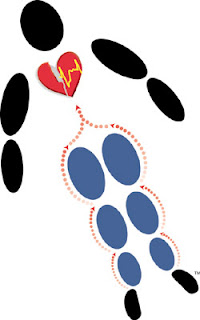 For the last 2 weeks I was looking forward to running my final 20 miler before the Boston Marathon. I found online that a local running store was hosting a fully aided 20 mile Boston prep run and I decided to sign up and enjoy the camaraderie within the beautiful and scenic Cuyahoga Valley National Park.
But then, earlier this week I was asked by one of the professors in the Sports Science department here at CSU to participate in a study on the effects of counterpulsation on delayed onset of muscle soreness. I guess they use this treatment on heart patients to help relieve chest pain and other symptoms of angina and to relieve the symptoms of heart failure which include trouble breathing and feeling very tired even after a small amount of effort.
The test would be in 2 parts and both require the subjects to run 20 miles at 70% of maximum heart rate. The first test would measure and compare blood test results of before and after the run and to determine the inflammation rates of soreness up to 5 days.
The second part of the test we run 20 miles under same conditions and after the run we get strapped in a bed, for about an hour, into what looks like inflatable cuff pads to compress the legs to force blood flow back up into the heart. The professor said it will feel like a good but tough message of the legs. And that he suspects the healing and soreness would be greatly reduced as compared to normal recovery time.
Today's Stats:
weight before the run 139 lbs.
after the run 135 lbs. (I need to drink more during the run)
C-Reactive Protein (is measure of inflammation in the body) before the run .72 mg/L
C-Reactive Protein after the run .96 mg/L (both results were in normal range)
Drank 24 ounces of apple cider vinegar & honey water mixture. (works better than Gatorade)
Average heart rate 130 BPM (75% max HR)
Run time 2:23:54
Urine specific gravity 1.016 UG. (after run and results in normal range)
There was other blood tests but I don't have the results yet. I'll post them later.
I won't be able to get the second treatment until after Boston. I'll recover 2-3 weeks before I run 20 and then get cuffed. Interesting test results to follow.
And now I will enjoy some rest from intense training and begin to mentally prepare for the 111th running of the Boston Marathon.
Posted by Papa Louie at 9:21 PM 11 comments:

Timing my 15 mile run on St. Patty's Day couldn't have been any better. The morning came with gray clouds and with snow blanketing the ground. Hoping the weather would clear up later in the morning, I choose to run some time after lunch. After lunch I drove my family downtown to watch about an hour's worth of Cleveland's St. Patrick's Day Parade. It's my youngest son's favorite day of the year so we had to see the parade and because it's his birthday.

The sun came out and dried the ground and I was ready for my run. Before we went downtown I mapped a course out of running from the parade to my home and figured it out to be 15 miles.

The route was to take me from where I work (CSU) and snake my way into the Cleveland Steel Mill area, up to the metro parks, and then up some major hills to my house.

Funny, later that early evening the skies turned gray, the winds picked up, and light snow was blowing in, but that was OK because I was out with my family enjoying my son's birthday at a Mexican restaurant. And sure glad I planned my run at the right time of the day.

Vitamin D on the track.

I got a good dose of some 'sunshine vitamin', while running on the track today. After running an easy 2 mile warm up in 65 degree temperatures I realized my long sleeve t-shirt would have to come off if I was to be comfortable running 3 fast 1 mile repeats.
I'm not sure how many IU's of vitamin D I absorbed while running the splits in 5:52, 5:50, 5:48 respectfully, but I did feel strong and enjoyed the beautiful sunny afternoon today.
I could get use to adding some 'sunshine vitamin' supplement to my diet too.
Posted by Papa Louie at 3:26 PM 16 comments:

I was looking forward to running on the track outdoors yesterday until I saw them.
It was a beautiful sunny, but cold 20 degrees and the track had no snow on it. It did have what seemed like thousands and thousands of Canadian Geese's honking and crapping in the field and on the track. I spotted them outside of the track and as I approached I picked up a whipping stick, not to hit them with, but to scare them if they got in my way and to help brush the thousands and thousands of geese crap away from my lane.

I ran the first mile as part of my warm up. During the warm up I was sweeping the track with the stick to clear the way for my interval sets of 1K, 2K, 1K, 1K runs.

My spilt times were about 8 - 10 seconds slower than what I wanted but with the cold and having to share the track with the geese I'll take it and say I had a challenging workout.
Posted by Papa Louie at 1:19 PM 8 comments: